UPDATE (September, 2015): The first printing of This Bank Robber’s Life: The Life and Fast Times of Patrick “Paddy” Mitchell, sold out a few years ago. Due to continuing demand, we’ve re-printed it. The book is now available in softcover and as an e-book from Amazon and other retailers and other sellers (see below). Paddy’s novel, The Great Plane Robbery, is also available as an e-book through these retailers.

Printed copies of both books can also be purchased from Paddy’s son, Kevin Mitchell. For a limited time (while supplies last) they will come with a hand-written personal note from Paddy, complete with his infamous and collectible thumbprint. Contact Kevin directly at kevinmitchell at xplornet dot com (Kevin Mitchell) to buy one or both books, or order them from any of these retailers. 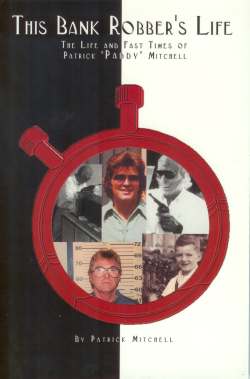 Upon my arrest in 1994, I was sentenced to a nonsensically long prison sentence, one for which I’d need another life to complete. I needed something to do that would keep my brain stimulated, and to keep me from going stir-crazy. So I’ve tried my hand at writing. I’m not now (and probably never will be) a great writer. But I have this marvelous story to tell, I’m a pretty good raconteur, and, I hope, an adequate enough writer.

So many portions of my life have been reported by others: in two full-length books, numerous newspaper and magazine articles, on several TV programs, and in a Hollywood movie. None of those got the story quite the way I remember it, which is why I wrote my autobiography, This Bank Robber’s Life.

Everything you are about to read is true–to the best of my recollection. To protect myself (and others) from further investigations and possible criminal charges, I’ve changed some names and locations where events took place.Be forewarned, this book is not a literary masterpiece. I do not profess to be a writer. It’s written in simple terms; no ten dollar words, no fancy prose or metaphor, and certainly, no poetry. But I can assure you, if you read on, you’ll find it one hell of a tale.I began scribbling my life story more than twenty-five years ago (1976), in a prison cell at Millhaven Penitentiary, in Ontario, Canada. I was thirty-four years old, serving a twenty-year prison sentence (figuring my life was pretty much over) and thought I’d better get busy and write my memoirs. Three years and almost six hundred pages of scribbling later, I found a need to destroy all that I had written.

In 1984, this time locked up in an Arizona prison cell, I began to scratch out another manuscript. A couple of years later, a need arose to destroy those several hundred pages as well.

Not being the kind of guy who gives up easily, I took up the task a third time in 1989 while on a beautiful mountaintop location on an island in a far off archipelago. Eventually, a need arose for me to destroy several hundred more pages.

Still, I was not deterred. As fate would have it, I found myself in yet another prison cell in 1994, this time at the Federal Penitentiary in Atlanta, Georgia, with pencil in hand, scratching away. And, once again, it was all to no avail.

Now, I’m incarcerated at the Federal Penitentiary in Leavenworth, Kansas. The year is 2001, and I don’t foresee any cause arising for me having to destroy this one final attempt to write my life’s story.

I wish this were about some heroic deed that I had performed, or some great, lifesaving medical procedure that I’d discovered, but it’s not. Neither is it a book about braggadocio. It’s about a life that was lived much differently than most; one, I believe, should be recorded for posterity. Now where to begin?

26 thoughts on “About my books”

After a long and action-packed career as Canada's favourite bank robber and prison escape artist, Paddy Mitchell retired and wrote about his adventures from a maximum security prison in the US. Paddy passed away on January 14, 2007.

A blog behind bars